It’s scary how our consumer culture latches on to a spooky cultural tradition and manages to find ways to make it economically viable. That being said, I am excited about all the leftover mini-snickers bars I am going to have this year.

I thought it appropriate to try and find some sort of anthropological explanation of the origin of this frightful holiday. And i’ll be darned If I didn’t find an entire dissertation; well, a very thorough and interesting article from 1998 that was published in the Washington Post AND co-authored by one of my favorite practicing consumer anthropologists – Patricia Sunderland.

The link to the article is here: http://www.washingtonpost.com/wp-srv/national/horizon/oct98/hallo101498.htm but the full text is below for your convenience. This is a treat, not a trick. Go grab a pumpkin’ spice latte and hunker down-this is a good one:

Halloween, perhaps our weirdest annual celebration, is even stranger than it…

Adventures and Musings of an Arch Druidess

A new article from the BBC describes tentative plans for burying the skeleton exhumed from a parking lot near Bosworth, where King Richard III met his violent end in battle. Examination of the bones has yielded evidence of injuries consistent with those known to have caused his death. The spine reveals scoliosis, which may explain the claim that Richard was “hunchbacked”. Current plans, if DNA testing confirms that the skeleton is Richard’s, call for re-interring him in Leicester Cathedral, close to the place he died. Some are criticizing that idea, however, because the king had expressed his wish to be buried at York Minster.

I favor York, myself…. I know they’ll take that into consideration.

History may paint a violent picture of the Vikings.

for hundreds of years.

All without driving them to extinction in fact!

Completely different, but very enriching information about the early history of the Saxons was the archaeological research in Saksenland (Old Saxony). One of the archaeologists looked at the contributions of his colleagues as some parts of a great mosaic which was far from complete. But the excavating of settlements, the exposing of numerous grave-fields and the many artefacts gave not only an image of the daily lives of the Saxons in the early Middle Ages; they also gave information about:

In a similar act of heritage vandalism to the one reported below in China, a retired businessman has been found guilty of causing unprecedented damage earlier this year to one of Britain’s ancient Neolithic sites. 73 year-old Roger Penny bought the Priddy Circles in Somerset as a ‘pension investment’. The Circles, which date to 3,000bce, are a Scheduled Ancient Monument and were probably built around the same time as Stonehenge. The Mail Online reports yesterday that –

They [the Priddy Circles] have been described by English Heritage as ‘probable Neolithic ritual or ceremonial monuments similar to a henge’. Penny hired two contractors to ‘tidy’ and renovate the area, near the village of Priddy on Somerset’s Mendip Hills, but failed to get permission from English Heritage. One contractor used rubble to fill swallet holes, natural holes inside the ring which may be the key to its creation. Moving a gate led…

So there I was the other day, driving home from work, caught in traffic, stuck behind a car whose exhaust system needed serious attention.  As I wrinkled my nose and said, “Eew, gross” the thought hit me:  We like to think that we live in a pristine, modern world that smells sweet while looking back in time and assuming everything stank like sewage all the time.  But did it?

Uneducated modern thinkers might assume that because there was no running water in the Middle Ages everything was dirty and smelly.  Well, if you’ve known me and heard me talk about history long enough then you know that nothing galls me more than this completely false assumption.  As I discussed at length last year in my blog post about how medieval people did bath, frequently, hygiene was far more advanced a thousand years ago than modern people assume. Cultural heritage site in China’s Henan Province destroyed
TheShanghai Daily reports on the 24 October that –
A developer in central China’s Henan Province is facing severe punishment after destroying a 4,000-year-old cultural heritage site for a construction project, ignoring warnings from local authorities, officials said yesterday.
1 meter deep ground level of the Longshan Cultural site of Shang and Zhou dynasties (c. 16th century-256 BC) in Zhengzhou City was damaged by bulldozers, said Xin Yingjun, director of the excavation department of the city’s cultural heritage bureau. Debris of ancient pottery jars, bowls and goblets have been found in the earth dug out by bulldozers and experts were evaluating the age of the cultural relics, Xin said.
…before construction was due to start, experts and officials with the bureau found a 93-meter-long, 26-meter-wide and 2.3-meter-deep cultural heritage site full of cultural relics and…

I must confess to a youth as a stamp collector (yes, I did spend hours in the dark closet, trying to find out if a stamp was florescent or not) and when the Oseberg Viking ship project (I`ve written about them in an earlier blog post) started posting pictures of stamps with the Oseberg ship on them on their Facebook page, I just had to repost those pictures – and add some of my own: 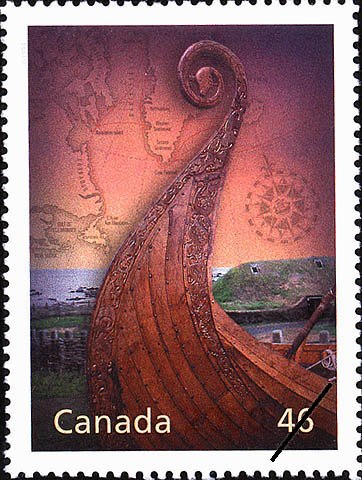 I`ll start out with Canada – a country that shares some of our Viking history, as I wrote about in my previous blog post. I`m not sure how old this stamp is but it`s beautiful with the Oseberg ship and the old map.

LYING crookedly in a shallow grave, its bones have existed undiscovered for more than 1,000 years.
But the discovery of this ancient skeleton could shed new light on the history of the Vikings in Wales

The unearthing skeleton in at Llanbedrgoch on Anglesey has given historians important new clues on the impact of both Anglo-Saxons and Vikings operating around the Irish Sea.
Archaeologists from the National Museum Wales said the burial find is an unexpected addition to a group of five – two adolescents, two adult males and one woman – discovered in 1998-99.
Originally thought to be victims of Viking raiding, which began in the 850s, this interpretation is now being revised.
The unusual non-Christian positioning of the body, and its treatment, point to distinctions being made in the burial practices for Christians and other…

A very good friend of mine is a Celtic Reconstructionist, focusing on Irish tradition and folklore. We recently had a long discussion about why he refuses to join any organizations around the Atlanta area. His objections boil down to the consistent mandate for “ritual garb” like long robes and how he simply finds these things to be impediments to his experiencing his faith on a deeper emotional level. Additionally, the style of dress isn’t historically accurate. Instead, it’s very Victorian in the depiction of “druids” and bears no semblance of reality to what the people actually wore. In short, his is a modern faith rooted in the past but it is not an anachronistic faith that is trying to look the part as someone else envisions it. We both concur on the idea that our ancestors didn’t play dress up and put on clothing that predated their time, only that…

The recent laser scan of Stonehenge is said to reveal that the monument was architecturally rigged to show off the solstices : (1.) the sides of the stones that flanked the solstice axis were most carefully worked to form very straight and narrow rectangular slots and (2.) many north west facing surfaces  were given special attention by being scrubbed free “of their brown and grey surface crust, leaving a bright, grey-white surface that would gleam in the midwinter sun“

But how much would those surfaces “gleam”? The smoother the better but in only two places is there evidence of the surfaces actually being polished (and it is suggested that might have happened later). However, it is tempting to wonder if other surfaces were polished but weathering has removed the evidence. We’ll probably never know but we polished a bit of sarsen (with very little effort) and it certainly…

I`s not just one word – it`s both a noun and a verb. In Norway it`s koselig (noun) and kose (verb), in Denmark hyggelig (noun) and hygge (verb) and I believe the Swedish words for it is mysigt (noun) and mys (verb).

Some people would translate it into cosy, but that`s just wrong. A bed can be cosy but it doesn`t explain what koselig/hyggelig/mysigt is. So I`ll try with a picture: This family here is using that one Scandinavian word you can`t really translate. When the autumn and winter gets darker (it`s pretty dark here…